Welcome to Modern Woodmen Park in Davenport, Iowa. Home to the Quad Cities River Bandits, a franchise founded in 1960, the stadium has been around even longer and is now the fourth oldest minor league baseball stadium.

The Quad Cities area, on the border of Iowa and Illinois, has been home to professional baseball since 1879, starting with the Davenport Brown Stockings of the Northwestern League. A little over 50 years later, the facility now known as Modern Woodmen Park opened. In the meantime, Davenport, Iowa has hosted teams known as Onion Weeders, Pilgrims, River Rats, Knickerbockers, Prodigals, Blue Sox and more. Just across the Mississippi River from Rock Island and Moline, Illinois has built its own impressive baseball history with clubs known as the Twins, Plowboys, Islanders, Rocks and more. These towns, along with Bettendorf, Iowa, form the quartet of municipalities that give the region its name.

In Davenport, the Blue Sox opened their city’s new baseball home in 1931 as part of the Mississippi Valley League. Built on the banks of the Mississippi, the park then known as the Municipal Stadium has become the region’s central professional ball home, not least because of its ability to host nightly games. Just two years after opening, the Municipal Stadium hosted a championship team when the Blue Sox defeated Rock Island to claim the Mississippi Valley League crown. Although the pro ball was absent at Davenport from 1938 to 1945 and again from 1953 to 1956, the arrival of the Midwest League in 1960 allowed Minor League Baseball to remain in the Quad Cities.

The Quad Cities franchise (which has used the geographic nickname “Quad City” on several occasions) has been known by many different nicknames, but most notably as the River Bandits for all but four seasons since 1992. Over the years Over the past three decades, the club has helped produce some of baseball’s biggest stars while winning four championships from 2011-21. 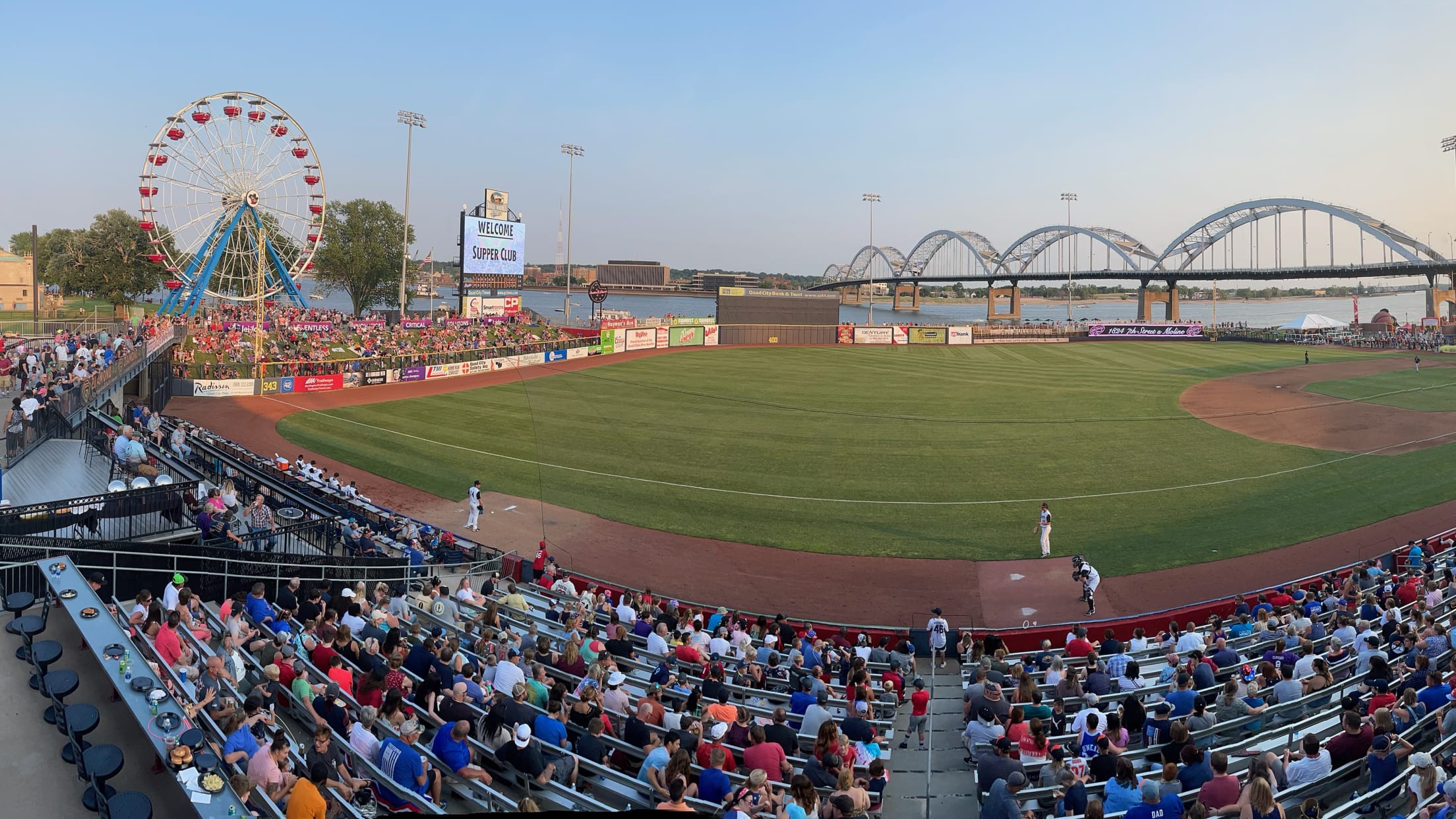 Known as the Municipal Stadium when it first opened, Davenport Baseball Stadium was renamed John O’Donnell Stadium in 1971 in honor of a longtime sports editor for a local newspaper. Prior to the 2008 season, it took its current name, but O’Donnell’s name still graces the stadium’s press box. Modern Woodmen Park has hosted a plethora of different sports and events over its nine decades of existence, including high school and college football, concerts and even boxing (Davenport native Michael Nunn , lost an IBF middleweight title fight there on May 10, 1991).

Baseball, however, has been its main draw since the facility opened, and renovations over the past several decades have blended the park’s history with modern amenities while providing some of the most backdrop elements. recognizable from minors.

At first glance, upon entering Modern Woodmen Park, two key features stand out. Beyond the Right Field Wall and stretching across the Mississippi to Illinois is the Centennial Bridge (which is nine years younger than the stadium itself). In left field is what has become one of the iconic features of the stadium among minors. Ahead of the 2014 season, the River Bandits added a Ferris wheel to their collection of rides inside the park. The 110-foot-tall structure operates during games, as do other attractions like an old carousel, the Kidz Koaster, and more.

Perhaps the most iconic association with Modern Woodmen Park is the mighty Mississippi beyond its outer wall. Although it can be a cranky neighbor at times when the river overflows from its banks, the Mississippi has the effect of putting more emphasis on the pitch in front of the thousands of fans who fill Modern Woodmen Park on summer nights with little visibility. beyond the stadium limits other than the bridge.

Seating extends from first base around home plate and along the left field line into the bowl at one level of the ballpark with higher level suites also ringing out into the infield. Rides abound in the corner of left field near the Ferris wheel while a sizable berm sits in front, just past the left field wall. In addition to space for groups and events at the second level, there is more along the right field line and beyond the outfield wall, sandwiched between the field and the river behind. 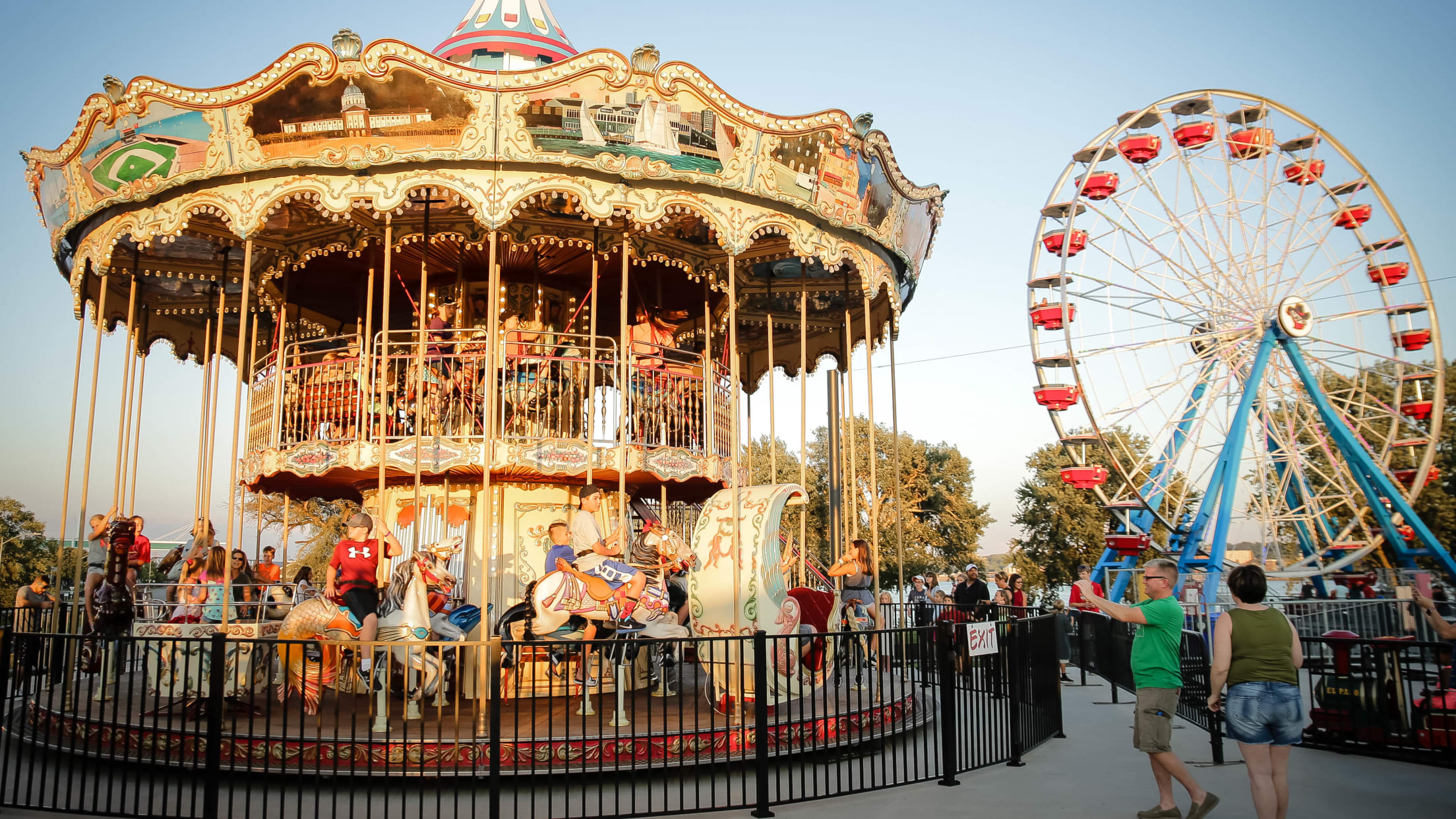 Along with standard fare like burgers, nachos, Philly cheese steaks and more, the Bandits offer a Bandit Dog, a one-footed hot dog wrapped in bacon, rolled in cheese and sprinkled with chili. The team also offers their own beer in tandem with Granite City Food & Brewery, and the River Bandits don’t hesitate to satisfy sweet cravings with dedicated licorice and candied apple concessions. 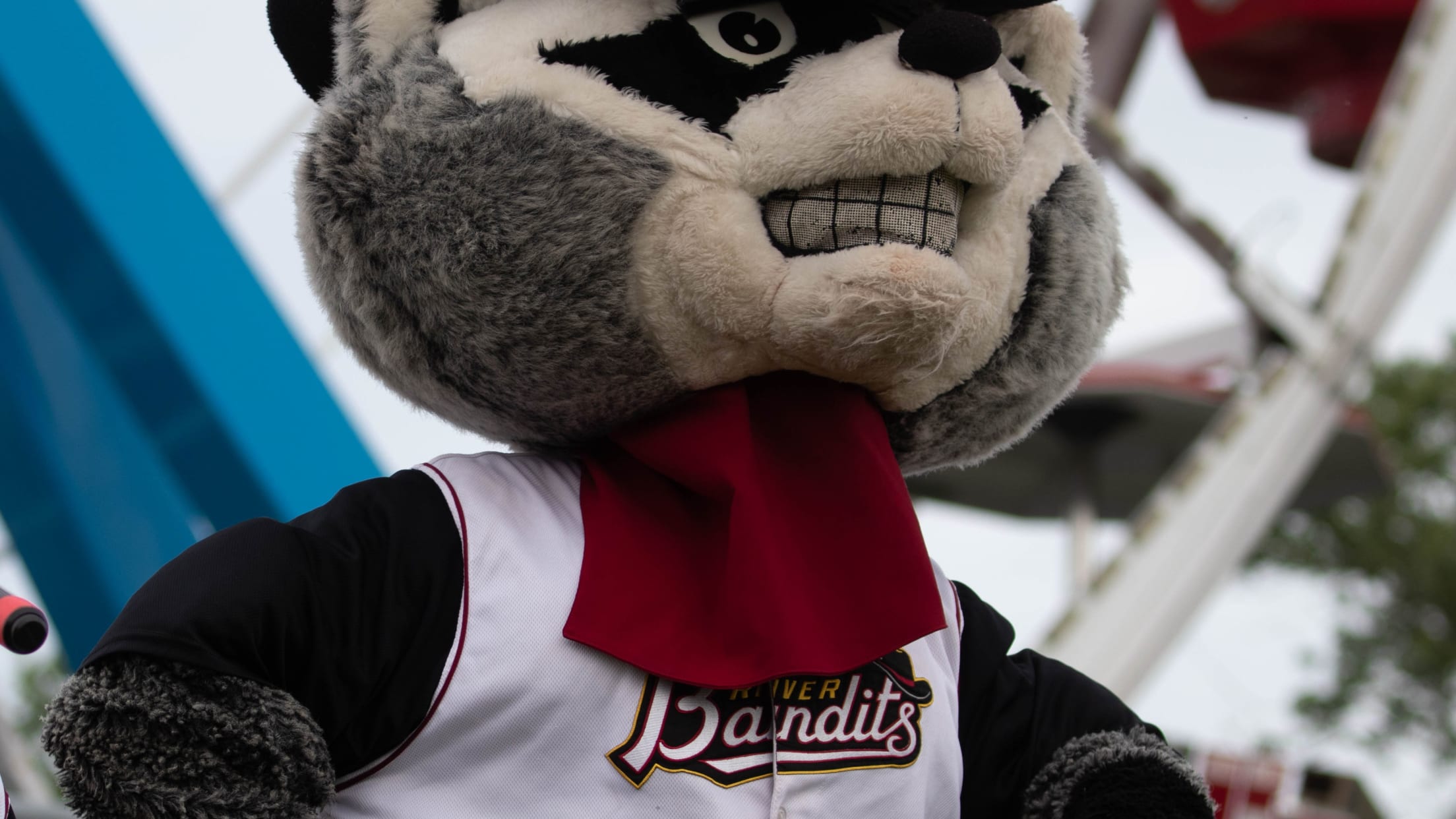 The River Bandits have long sported nature’s most recognizable masked mammal as the centerpiece of their logo. Their mascot is the same come to life. Rascal the Raccoon debuted with his team in 2008 after they changed their name from Swing of the Quad Cities for four years. These days, the Big Raccoon greets fans at Modern Woodmen Park while wearing the same hat and bandana that he wears in the River Bandits logo. 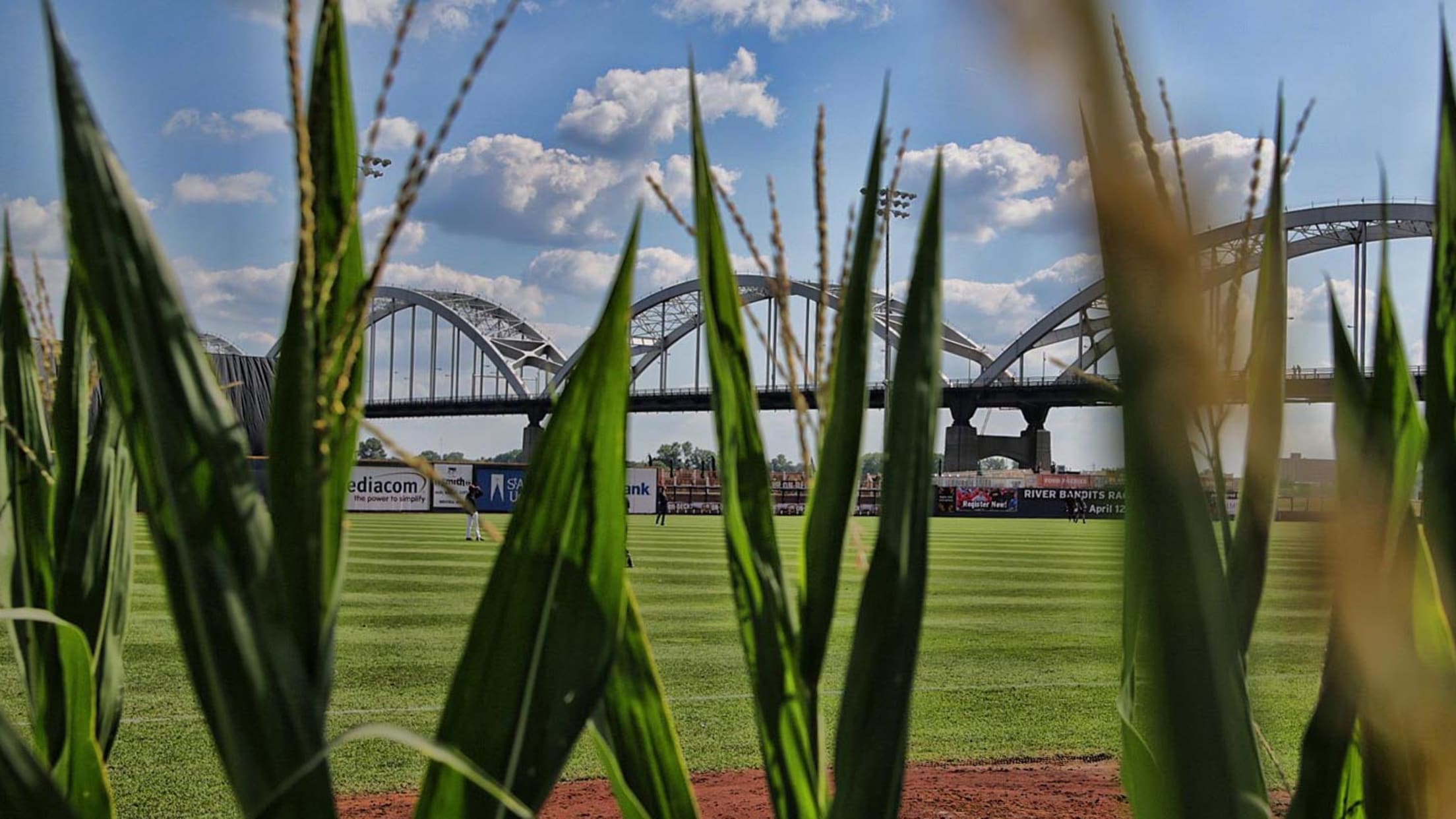 The Figge Art Museum bills itself as “the premier art exhibition between Chicago and Des Moines” and includes collections of colonial American, Haitian, Mexican art and more. Across the river in Moline is the John Deere World Headquarters, which offers factory tours. Less than an hour north of Davenport is Maquoketa Caves State Park, home to massive cliffs and a six-mile trail system that, as the name suggests, meanders through natural caves to breathtaking and panoramic views. About 50 minutes northwest of there is the Field of Dreams outside of Dyersville, and an hour east of Dyersville (about 90 minutes north of Davenport) is Galena, Illinois, which was home to formerly the hero of the Union Civil War and the 18th President of the United States, Ulysses S. To agree. The picturesque and surprisingly unspoiled historic downtown of Galena once stood as Chisholm, Minnesota in Field of dreams. A little closer to Davenport, picturesque LeClaire, Iowa is home to riverside restaurants and bars, a Buffalo Bill museum, shopping and more.

To start a day in the Quad Cities, QC Coffee and Pancake House can be accompanied by a waiting list, but also legendary cinnamon buns among its succulent breakfast options. Me & Billy offers cocktails, craft beers and ‘high bar rates’ just steps from Modern Woodmen Park. Along the way, stop at Front Street Brewery, Iowa’s oldest brewery, for a selection of craft beers or Barrel House for burgers and pub fare. After a Bandits match, pass by the legendary Whitey’s Glacier (with locations all over the Quad Cities) or head to Analog, a retro game-themed bar in a converted bank building. Just over an hour’s drive away, Timmerman’s Supper Club in East Dubuque, Ill., Has been serving some of the area’s best meals since the 1960s. 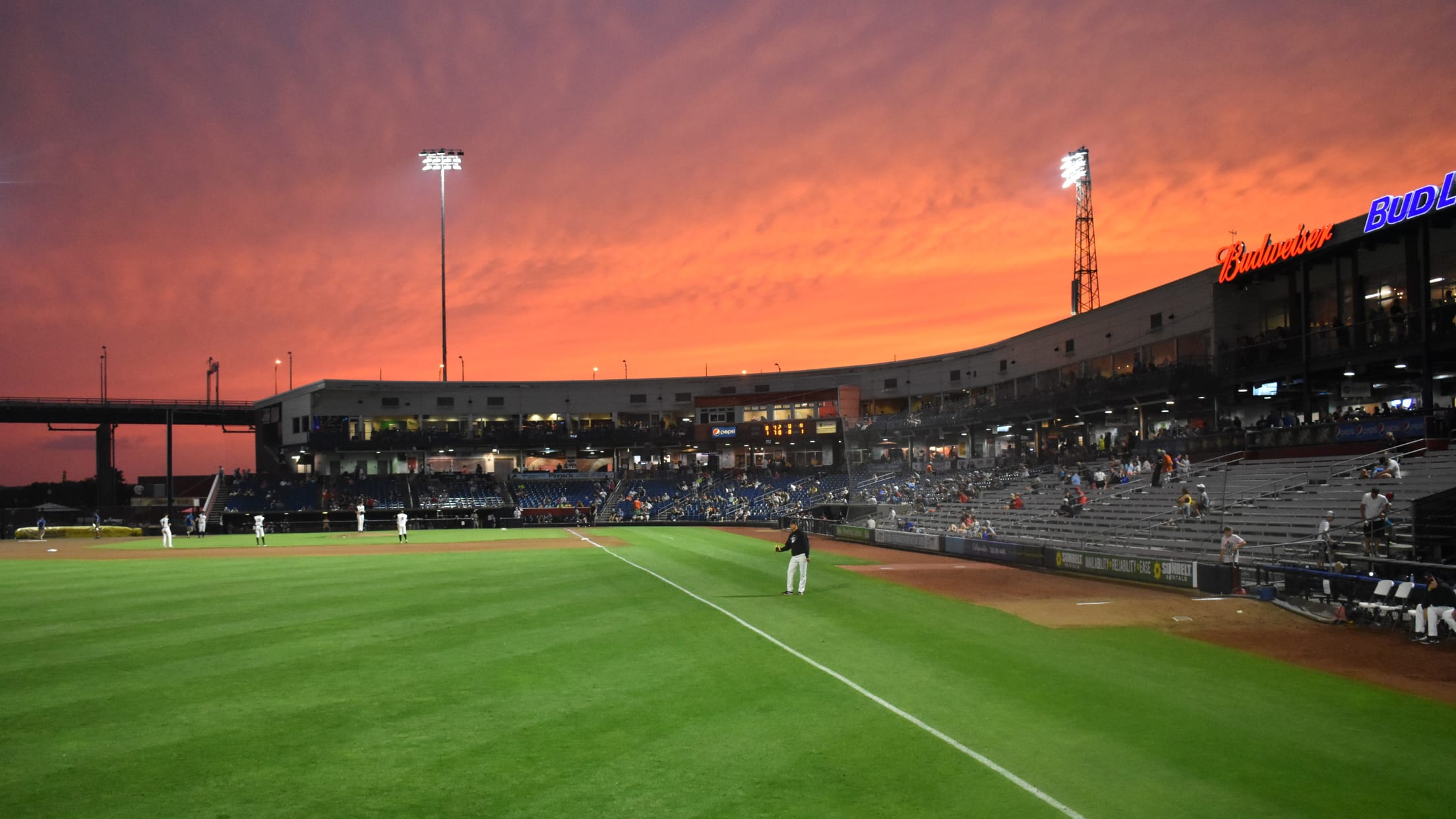 To the surprise of many, Davenport offers not one but two five-star hotels. The Blackhawk Hotel has 130 rooms, many with river views, and has hosted several Presidents since it was built in 1915. The Current Iowa is the other, built on the site of Davenport’s first hotel and now an option of renowned accommodation with an upscale rooftop bar. . Across the river in Moline, Element and Axis hotels offer other affordable and luxurious options. Across the region, hotel and motel chains abound as well as camping options for those looking for an outdoor experience on the Mississippi River.

The River Bandits’ High-A Central league teammates aren’t far off, starting with another Iowan franchise in the Cedar Rapids Kernels. The Peoria Chiefs are a short drive into central Illinois with the Beloit Sky Carp and Wisconsin Timber Rattlers just a few hours northeast. Catching a Triple-A game isn’t too much of a challenge either, with the Iowa Cubs just two and a half hours west of the state capital of Des Moines.

The Royals’ hopes arrive in Quad Cities from Low-A Columbia before heading back south for a tour through Double-A with Northwest Arkansas. Their final stop on the Minor League ladder is closest to Kansas City, back in the Midwest at Triple-A Omaha. 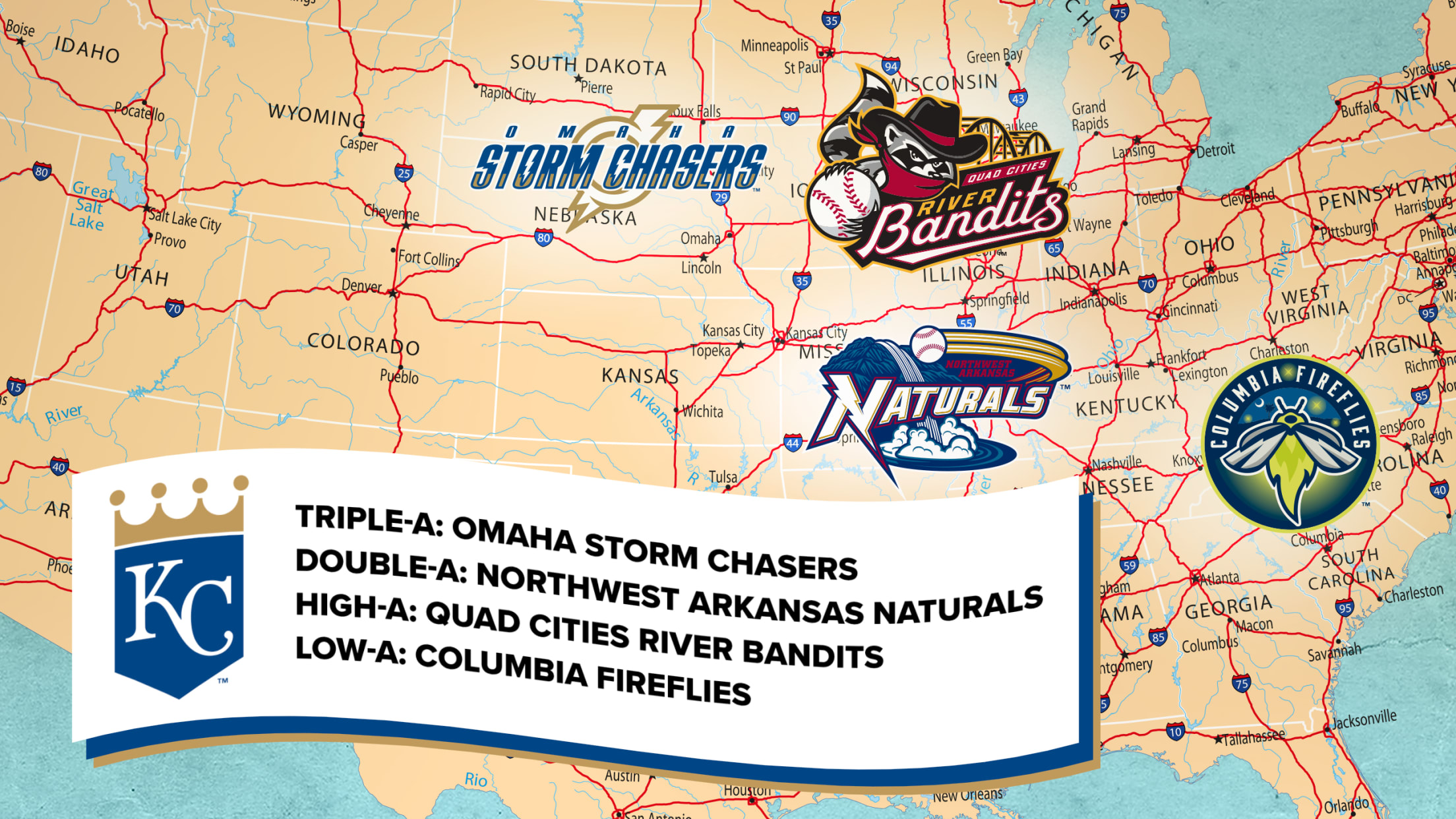