She stressed that with each passing day without a deal, Iran continues to enrich uranium.

Merkel called for greater involvement of world powers to push Iran back to the negotiating table in Vienna.

“I see a responsibility for Russia and China here,” she said.

Negotiators from the United States and European parties to the 2015 JCPOA nuclear deal are still waiting for radical Iranian President Ebrahim Raisi to resume talks in Vienna, suspended since June.

By registering, you accept the conditions

At the press conference and at a special cabinet meeting with Merkel, Bennett stressed the danger Iran’s nuclear program poses to the world and vowed that Israel would do whatever it takes to prevent Tehran from reaching nuclear capacity.

“Iran’s nuclear program is the most advanced point ever,” Bennett said at the start of the cabinet meeting at the King David Hotel in Jerusalem. “The world is waiting, the Iranians are delaying and the centrifuges are spinning. “

“A nuclear weapon in the hands of such a radical and violent regime will change the face of the region and the world,” Bennett continued. “For us, this is not a strategic problem. It is an existential problem.

Bennett said that over the past three years Iran has made “a giant leap in its ability to enrich uranium.”

At the press conference following the cabinet meeting, Bennett argued that “accepting Iran to become a state on the brink of nuclear capability would become a moral stain for the free world, and what is more, it would threaten world peace ”.

Bennett pointed out that Iran, without a nuclear weapon, already supports proxy armed groups across the Middle East. “One can only imagine the damage they will cause if the world knows that behind this thug is also a nuclear weapon.”

The Iranians interpret Western attempts at reconciliation as a weakness, he continued, insisting that Tehran is playing for time in order to continue enriching uranium and undermining regional stability.

“This is a critical point, and Germany’s position is particularly important.” 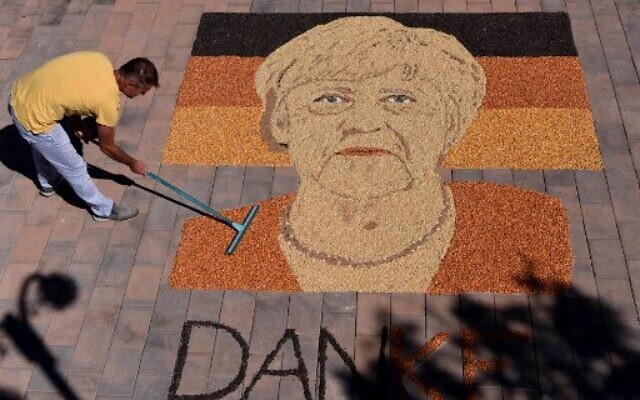 Kosovar artist Alkent Pozhegu is working on the final touches of an image made of grains and seeds, depicting the portrait of German Chancellor Angela Merkel, in the town of Gjakova on September 26, 2021. (Photo by Armend NIMANI / AFP)

Bennett also addressed the disagreements between him and Merkel over a future Palestinian state.

“At the same time, we have learned from experience that a Palestinian state means that it is very likely that a terrorist state will emerge seven minutes from my home… I am a very pragmatic person. We are carrying out a series of actions on the ground to make things easier for everyone, for the Jews, for the Arabs, in Judea and Samaria and in Gaza.

Merkel joined the special cabinet meeting after a morning one-on-one meeting with Bennett.

Merkel was not expected to meet with former Prime Minister Benjamin Netanyahu, who is now the leader of the Israeli opposition. She also had no plans to meet with Palestinian leaders in the West Bank.

Merkel, who currently heads an interim government following national elections until a new government is formed, will also visit Yad Vashem and meet with high-tech Israeli leaders and entrepreneurs. 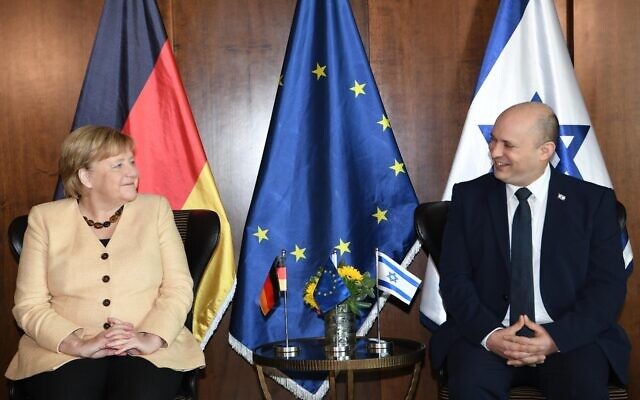 The 67-year-old trained physicist is also due to receive an honorary doctorate from the Haifa Technion, the Israel Institute of Technology.

In a joint statement ahead of their private meeting, Bennett called Merkel a “dear friend of Israel” and insisted that under the outgoing leader of Germany, the ties between the two nations were stronger than they never had been.

“We look forward to strengthening them even further, in business, science, education, health and of course safety,” Bennett said.

Bennett did not explicitly mention the Holocaust during the first joint statements at the King David Hotel, but said that “we certainly remember history and look forward to a brighter future”.

Bennett added that Merkel’s leadership “paved the way for Germany’s continued commitment to Israel’s security, which we greatly appreciate.”

As he often does, Bennett spoke of the makeup of his ideologically heavy coalition, calling it “the most diverse government in Israel’s history.”

“We have the right and the left, the Jews and the Muslims, the religious and the laity, and it works. We get along pretty well, ”he said.

Bennett also noted that there were eight female ministers – the highest number ever in an Israeli government – adding, “I think that’s one of the reasons it works well. 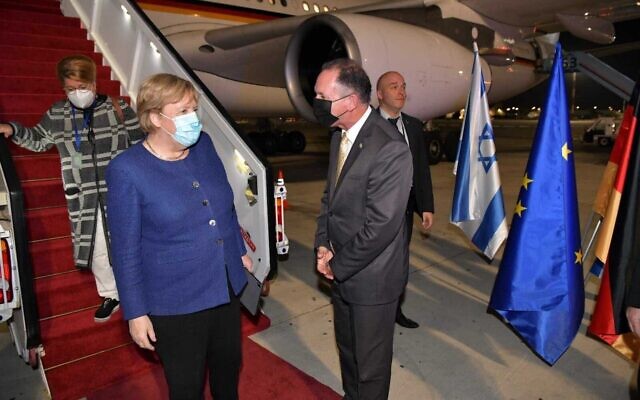 Merkel responded by highlighting the work done during her 16-year tenure to strengthen bilateral relations and ensure Israel’s security.

“I want to take this opportunity to stress that the subject of Israel’s security will always be of central importance and a central subject of every German government,” Merkel stressed.

Addressing the Holocaust, she said she considers it “a stroke of luck that history has given us that after the crimes against humanity of the Shoah, it was possible to reset and restore relations between Germany and Israel as far as we did. “

She also referred to Bennett’s coalition and the ongoing negotiations in Germany for the formation of a government following the recent elections, saying that “compared to your government, a German coalition government seems a very simple matter. “.

The Chancellor was originally scheduled to visit Israel in late August, but canceled amid turmoil surrounding the US withdrawal from Afghanistan and the attack on Kabul airport. Germany was among the countries that struggled to evacuate their own nationals and Afghans from Kabul who assisted their forces during a nearly two-decade deployment to the country.

AFP contributed to this report.